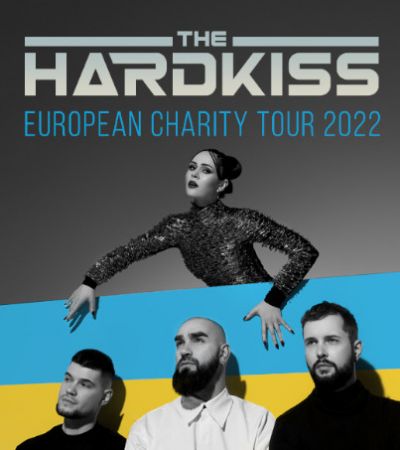 In July 2022, the Ukrainian band The HARDKISS will perform charity concerts in Germany and the Czech Republic. Concerts will take place in Munich, Hamburg, Frankfurt, Berlin and Prague.
Part of the proceeds from ticket sales will be used for the needs of the Armed Forces and for humanitarian assistance to IDPs.
THE HARDKISS IS AN INDEPENDENT BAND FROM KYIV WITH A HUGE NUMBER OF ADMIRERS
The music of The HARDKISS harmoniously combines rock, pop and electronic music. The band was formed in 2011 and it is constantly evolving – creativity acquires new meanings, while remaining touching and driving, powerful and gentle.
Live performances of the band are a real rock’n’roll with a rich sound, incredible vocals of Yulia Sanina and the energy of a festival or a rave as well as soulful concert, where the audience finds itself alone with the band.
Music and lyrics are written by the band’s founders, Yulia Sanina and Valery Bebko, which is why the songs feel 100% frank and sincere.
The HARDKISS is the main winner of the YUNA National Music Award: 34 nominations and 16 statuettes over the 11 years of the team’s existence.
Come to the concert to feel the spirit of modern music, which the whole of Ukraine is proud of.