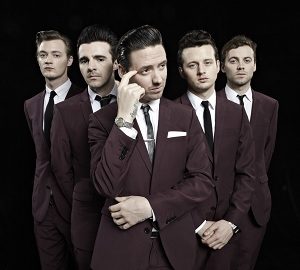 Grand words from Alex Kershaw of The Computers. You may be familiar with the Exeter-based rock’n’soul firebrands, but on first listen, you might not quite recognise them. Their blistering debut, 2010’s ‘This Is The Computers’ was a hardcore punk workout that placed them comfortably in that scene . But it only told half of the story.  For album two, they’re back, sharp-suited, drenched in Brylcreem with a line in classic, romantic rock’n’roll, soul and blues that’s as sharp as their quiffs.

As Al explains, “We got waylaid on the way to writing these songs by being punk kids.” Al had written a list, a kind of mood board of all the bands in whose footsteps they wanted to follow. Honourable punk bands, like The 101ers, The Briefs and The Hives… but also the likes of Elvis Costello. The band had always been soul boys deep down, but they didn’t quite know how to realise those dreams back then. “The first album was us getting distracted on the journey to now; I had to exorcise a few things.”

It was a pop talk to Rocket From The Crypt’s John ‘Speedo’ Rhys that gave Al the push he needed to dig deeper, eventually finding his voice, both thematically and actual singing. The result, on second album ‘Love Triangles Hate Squares’ is an personal, romantic and soulful record that he loosely terms as being broadly about “the breakdown of relationships.” And with this new version of The Computers, everything falls magnificently into place. “I had stuff I wanted to say,” he explains, “be it as soppy and as schmaltzy as you like – being in love is complicated, people can be cruel.  I wanted to say these things, and I did in these songs. And if I’d screamed it, people wouldn’t have understood! The severity of the pop leanings got turned up with me going, ‘well if that’s okay well maybe this will be.”

Of what might appear as bold reinvention, he reasons, “My favourite band on record is The Clash and they moved on, and they weren’t scared to start off as a punk band and then become this weird white boy hip hop thing like ‘The Magnificent Seven’. Compared to ‘White Riot’, that’s the complete opposite. And life’s too short to do the same thing again and again.”

At the suggestion of producer Mark Neil, they went to Valdosta, Georgia to make the album,  a small town packed with tiny churches and calorific waffle houses. The logic that if you’re going to make a southern soul record, you might as well go to the place where Ray Charles was born. “It’s the real home of gospel and southern soul. It’s wet, the air is wet and the record sounds wet because of it.” The heat would make the guitars go out of tune, turning the air conditioning off would warp the piano strings. The record has ended up a product of its environment, and they keenly stuck to the method, wearing their suits to the studio. “I would never want to record in tracksuit bottoms,” says Al with no little pride. “I wouldn’t even want to record with my hair all over the place. Like trouser, like mind – as Joe Strummer wisely said.”

The first offering from the album is the bruising, ‘Disco Sucks’, a shout-out-loud bridge between their punk roots and their gleaming new beginnings. Thankfully, it’s not an endorsement of the racist, homophobic movement led by Midwestern jocks in 1979 that saw disco vinyl destroyed in a football stadium. Instead, it’s a sarcastic riposte to all of that from a band unafraid to grow past their rock roots. It’s also the name of a clubnight the band run back home in Exeter, and, lyrically, a despairing lament about a kind of youthful despair from the vantage point of somebody having a rubbish time in a nightclub. “We don’t think disco sucks,” he insists. “The lines between Chicago soul and funk and disco are so blurred that you can’t often see the lines, ands I love that kind of stuff. I’m not the biggest disco fan in the whole world but I certainly don’t think it sucks. That song’s an anomaly on the record, but it’s a club banger. It has a cowbell!”

Along with the similarly righteous boogie-punk of ‘Bring Me The Head Of A Hipster’, the impossibly soulful torch song ‘CRUEL’ and the gorgeous, pared-down ‘Empty Beds’, The Computers have made a record guaranteed to make you dance through any kind of heartbreak. And as anyone who’s ever seen their live show will confirm, they will make you dance. “The old Computers,” smiles Alex, “would not have had the confidence to do this.”  The new Computers – with these massive tunes and thrilling gigs certainly do!