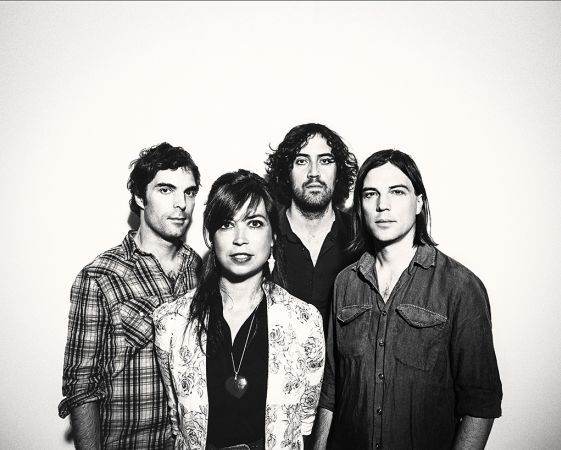 Montreals The Barr Brothers are pleased to announce details of their new album, Sleeping Operator, out on 6th October 2014 through Secret City Records.

Listen to new album track Even the Darkness Has Arms which is described by The Line Of Best Fit as „a warm, lulling piece of roots music that begs to be swilled with that last firey drop of the strong stuff, here: https://soundcloud.com/secretcityrecords/the-barr-brothers-even-the-darkness-has-arms

The group, featuring brothers Brad on guitar/vocals and Andrew on drums, classical harpist Sarah Pagé, and pianist/bassist Andrès Vial, recorded 40 tracks in the process of making this record. The 13 songs on Sleeping Operator explore the far reaches of folk, laced with West African influences, hypnotic modernist pulsing and beyond.

While the record extends into cinematic and other-worldly territories, it maintains a campfire-like intimacy throughout.

The album was self-produced and recorded and mixed by Ryan Freeland (Bonnie Raitt, Aimee Mann, Ray Lamontagne) in Montreal and Los Angeles. The band were joined by local neighbourhood guests from Arcade Fire (Richard Reed Parry), Patrick Watsons band, The Luyas, Bassekou Kouyates band and Little Scream along the way. Known for their unique orchestrations, the band used a plethora of instruments to embellish this album including a variety of horns, marimba, ngoni (West African stringed instrument), an instrument made by a fan called a cardboardium, hammered dulcimer, and pedal steel to make a sound that is sui generis.

The Barr Brothers recorded their „thrillingly unusual (Washington Post) and „sacred-sounding (Rolling Stone) previous, also debut, album in a home-made studio in a Montreal boiler room back in 2011. The record received due acclaim and support from The Late Show with David Letterman, NPR, and found The Barr Brothers sharing stages with the likes of Emmylou Harris and The National.