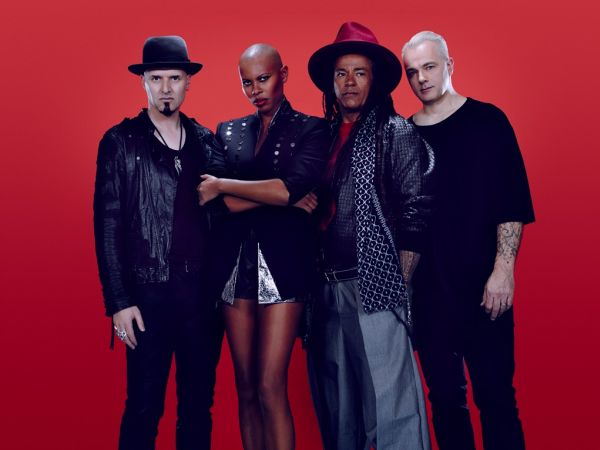 Twenty odd years into their career as globe-trotting, multi Platinum-selling Brit rockers, Skunk Anansie are „still underdogs, still outsiders says Skin, the bands iconic, Brixton-raised front woman. Theyre fine with that, though. „The things that mark you out as different in the beginning become the things that people end up loving you for.

Too heavy for the Mockney Brit Pop scene, and far too original to imitate the imported sounds of American grunge, Skunk Anansie carved their own way  a female-fronted maelstrom of jagged noise cutting through a sea of beery lad culture and bloated Cruel Britannia. „We came up alongside Brit Rock, but we were never really accepted as part of that scene, remembers Skin nonchalantly. „Our peers were Americans: Rage Against The Machine, Nirvana, Pearl Jam. We certainly weren’t listening to Blur.

Untethered by any scene allegiances, they powered ahead, forming their own, wild sound and image: agile, gritty, politically-charged „clit rock  a throw-away term coined by Skin that later rockers and musical activists would adopt as a mantle of queer, feminist empowerment against rocks testosterone hegemony. They tackled fascism [Baby Swastika], dogma [Selling Jesus], love as warfare [Weak, Hedonism] and the personal-as-political [Yes, Its Fucking Political]. Initially, the mainstream struggled to accommodate these rabble-rousers; record shops, unable to fathom the idea of a black woman fronting a rock band, would slot their albums and singles under r&b.

But explosive singles and electrifying live shows built them a devoted fan base, stretching across their home turf and the continent. In less than a decade, theyd become a definitive 90s act, selling over five million records, powering thorough seven sell-out world tours and releasing a salvo of albums: Paranoid & Sunburnt [95, via One Little Indian], Stoosh [96, via One Little Indian] and major label debut Post Orgasmic Chill via Virgin in 99  the same year theyd headline Glastonbury. Skin had become an icon, fashion muse and pin-up for men and women alike, dueting with Pavarotti for an audience with the Dalai Lama and performing with the band at Nelson Mandelas 80th birthday party.

By 2001, a hiatus was due. What was meant to be a short reprieve turned into a nine year sabbatical, in which all four members funneled their creative energies into various solo projects [two solo LPs, a spate of modeling and regular DJ gigs in Skins case]. Regrouping in 09, the quartet put together the first of their post-hiatus trilogy LPs: 2010s Wonderluste, released via V2. „Wonderluste was about us, being back together, dipping our toes back in. Black Traffic [2012, via 100%] was the result of our previous tour, all the social, political world views and influences wed picked up along the way. [new album] Anarchytecture is an amalgam of both those energies.

The title, like so many of Skins lyrics, mines those fractious „grey areas of human endeavor. While Black Traffic delved into the seedy underbelly of technology, the dark web and hidden currencies, Anarchytecture concerns itself with more intangible structures  the ones we build for ourselves and the ones that are built for us, by unseen hands. The title means different things to each band member, but for Skin, Anarchytecture names that fraught intersection between structure and chaos, boundaries and freedom.

Its not a break-up album, says Skin („Ive vowed Ill never write one of those again) but the emotional detritus from a slew of „explosions in her personal life this year have bled into the lyrics  most of which were bare-bone constructs fleshed out under pressure, last minute-style in the studio. What emerged were propulsive, nocturnal rhythms, songs rich with lust, damage, desire, manipulation, power, loss and complex characters (drawn from real life) driven by dark, intense and volatile desires.

In Death To The Lovers, Skin captures the euphoria that suicides are purported to experience just before they depart („Darkness comes, I feel magnificent) while the gargantuan guitars and military drums in We Are The Flames offer up a refusal, aimed squarely at the propaganda machines and state-controlled architecture of modern-day life: politics, spin, social media, surveillance.

Theyre responsible for some of the 90s most definitive anthems, but Skunk Anansies vision is trained on the now, says Ace. „The intention was to make something new again, to draw on the things around us in the present.

As such, the bedrock for their early sound have shifted, giving way to a streamlined, melody-driven breed of rock, stewarded with speed and precision by producer Tom Dalgety [Royal Blood, Band of Skulls] and augmented with deft electronic currents  a direction they began in earnest on Black Traffic.

„Were definitely still a rock band, laughs Skin. „Weve not gone dubstep or anything. But its certainly the grooviest album we’ve ever done. Those grooves come through loud and clear on the pumping, disco rhythm of In The Back Room, and the deep, throbbing bassline anchoring Victims serpentine guitars. What hasnt changed in Skunk Anansies armory is Skins inimitable falsetto, which soars with the same gritty, supernatural potency that made stormers such as Charity and Weak so unforgettable.

Anarchytecture may be intense, hewn more from the dark than the light, but theres a healthy energy on this record, says Cass  the kind that only bands with true mileage can create. „Its unusual to be in a band for 20 odd years, and not only still play together but also feel like family. There’s a lot of love here.

Scenes rise and fall, but outsiders like Skunk Anansie enjoy a special kind of longevity, points out Mark. „We’ve got this amazing fan base, at home and abroad, that propel us to keep recording and touring. With their quest for fresh, new, innovative music and ongoing evolution, for Skunk Anansie its all about the here and now.

Fresh from a run of sold out shows in Europe the band are preparing for the festival season. Skin is also singing with the world famous opera singer Andrea Bocelli in Milan on 25th May, and fitting in DJ gigs between festivals. Most recently she DJd at this years Coachella with Nicole Moudebar, and continues to be a relevant fashion icon becoming the face of Sisley S/S 2016.