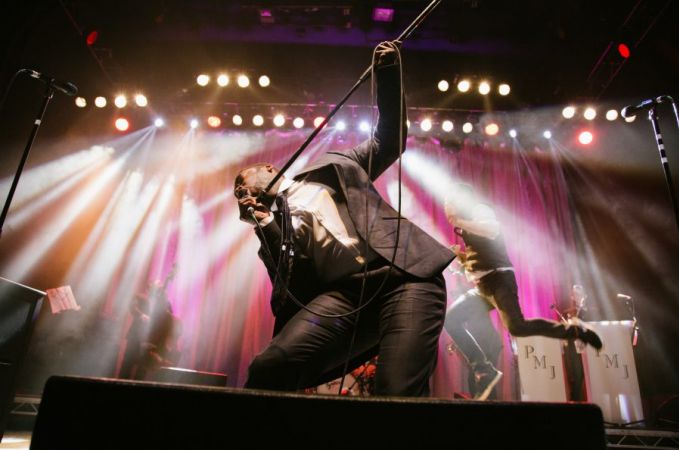 The work of Scott Bradlee & Postmodern Jukebox has been viewed on the ensembles YouTube channel well over a hundred million times. Most of those doing the viewing, however, are not fully aware of the method to Bradlees madness.

On the surface, the method is video  clips of full-band performances (thats Bradlee on piano,) shot in the bandleaders living room with a single stationary camera. The madness: pop hits of the present performed à la pop hits of the past. Miley Cyrus „We Cant Stop assayed as a doo-wop number; Macklemore and Ryan Lewis „Thrift Shop tricked out in flapper jazz; Sam Smiths „Stay With Me rendered a 1940s big-band standard.

In fact, Bradlees method runs deeper. Hes educating his audience about 20th- century song styles; hes commenting on the elasticity of the pop form; hes confounding cultural context; hes uniting generations; hes breaking the rules. Hes manifesting postmodernist ideas in his approach to production and business as well as music. But as far as the fans are concerned, its just fun (and sometimes funny). Bradlee himself will tell you, simply, „I re-imagine a song in another style because I want to hear it that way.

Discovering talent and knowing what to do with it is fundamental to the business of music. Bradlee is something of a postmodernist here, too, having achieved renown doing everything himself, mostly online, „with no budget (i.e. using the recording equipment hed had since college). His adherence to the DIY ethos also suggests the decidedly postmodern form of punk rock. „I was a struggling jazz pianist sitting in my basement apartment in Queens, he attests, „but I just figured it out and made it happen.

That said, punk rock is likely not top of mind for those attending a Scott Bradlee & Postmodern Jukebox show. The scene is more reminiscent of a speakeasy, with swells in vintage threads swilling Prohibition-era cocktails. „Its a variety show, a musical revue featuring special guests, Bradlee illuminates. „Coming to a PMJ show is like time-traveling back to Old Hollywood  its an experience. Creating that for audiences appears to be PMJs ultimate mission.