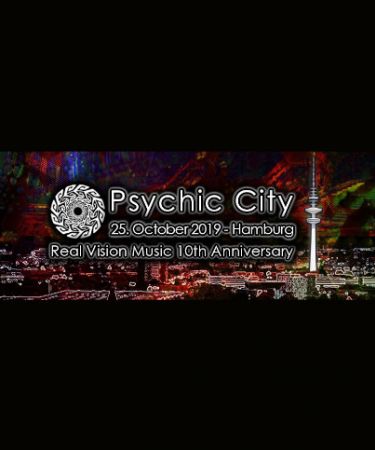 Real Vision Music arranges their second edition of the 10th anniversary celebration period.
A party series started with the first and epic event in the turn of the half year of 2019 which still stucks in mind of those who witnessed.
The crew throws yet another promising gathering to celebrate their esteemed work of one decade now.

For a proper event they bring Leo Tengri will play first time in Hamburg as well as Vasko also known as Encephalopatycis is presenting his mind-boggling music as a premiere here in Hamburg. Else as a serious psychedelic convention can be expected if two of the heavy weights of our scene meet to spin their tunes.

As cherry on the cake crew member Kamalu, based in Göteborg / Sweden will attend to play a set to make the story to a replicable one.

Phil and Rami once again were able to win the beautiful location Prinzenbar to throw this event as a legitimately second edition of a memorial anniversary. A small but cosy place where they were screening own made mappings for an optical candy.

One euro from each ticket sold in the presales action will be donated to the preservation of the Hamburg club scene.

Lets take part to make the started series to a legendary one!