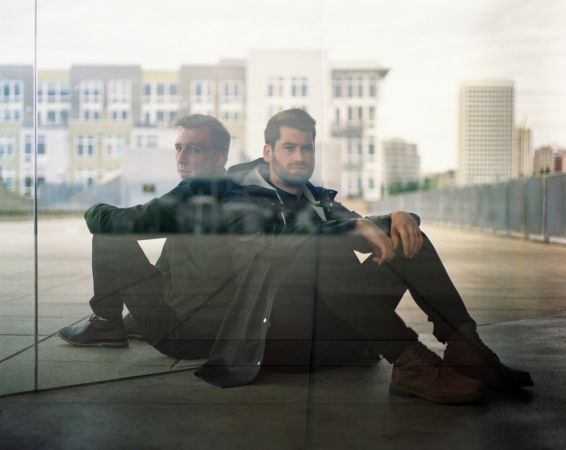 
ODESZA returns with its long-anticipated third album, a body of work filled with longing, nostalgia, hope and unity. Titled A Moment Apart, these 16 tracks mark the next step in the evolution of production duo Harrison Mills and Clayton Knight, who have been making music together since their college days at Western Washington University.

They began their meteoric journey in 2012 with Summers Gone, an album they completed near the end of their tenure at Western. It was followed by 2014s In Return, which debuted at the top of Billboards Dance/Electronic charts and featured gold single „Say My Name. A remix of the track by RAC was later nominated for a Grammy in 2016.

In the course of that five-year span, theyve gone from ground zero to selling out large arenas, all without the benefit of mainstream press or radio airplay. Theyve built their appeal through word of mouth and streaming, plus a unique live presentation featuring an 11-piece ensemble that includes a horn section and a marching-band drumline.

A Moment Apart moves into expanded sonic and psychic territory, seamlessly balancing organic and layered synthetic sounds, creating a dreamy, often stirring hybrid that owes as much to Motown and 60s surf music as it does to electronic forebears such as Four Tet, M83, Gorillaz and Bonobo.

But its not just the duos uncanny technical acumen at manipulating sounds that has landed ODESZA in the upper stratum of electronic music. Their immense impact stems from the emotions they elicit from their captured and constructed sounds: the powerful synths, the dynamic chord progressions that open into sweeping cinematic soundscapes and shimmering sonics, punctuated by ecstatic, thumping percussion.

Mills and Knight have always been leaders in the revolution of indie electronic music, encompassing a wider, more melodic musical palette and incorporating their own instrumental expertise  Harrison and Clay play piano, and Clay also plays guitar. On the new album they take their eclecticism one step further, using a stellar range of singers, including Regina Spektor, Leon Bridges, and RY X.

Also prominent is the exquisite symmetry theyre able to fashion through an unexpected harmony of diverse parts.

„I think our greatest strength is in blending genres, says Mills, „be it soul, folk, film scores or electronicI also think were really good at finding sounds that shouldnt work together and making them fit. I like taking a voice or maybe an instrument, chopping them up into small pieces until theyre almost unrecognizable, and mostly incoherent, and then layering them over each other to create a unique tone and sound. It allows us to take pieces from many different styles of music and meld them together to create something that is our own.