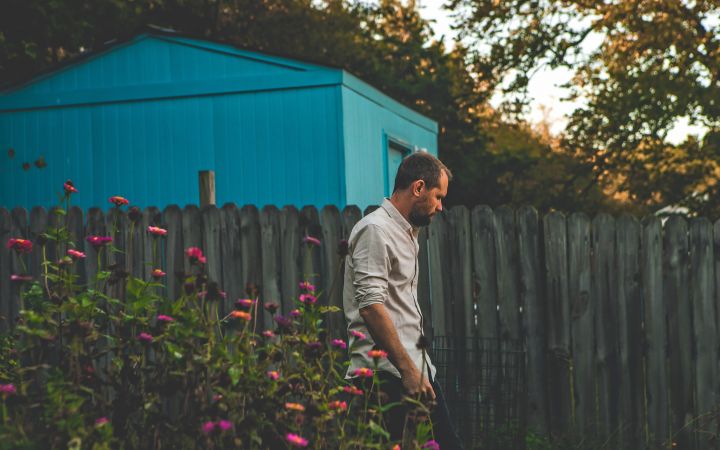 A sumptuous release, the second Matthew And The Atlas album is the kind of record that its impossible not to sink yourself into. Bringing together the naked emotion of Sufjan Stevens with the rolling melancholy of Communion labelmates Bears Den, it is a truly cathartic expression of its writer, Matthew Hegartys, own fears and feelings, bound together by a universality of emotion and honesty that makes it bracingly easy to connect to.

A „black figure looms over the album in parts, a nebulous being that had first appeared in the aftermath of an attack once suffered by its auteur. New parenthood, too, has inevitably affected Hegartys outlook on life since he wrote his first songs. Extremely personal to its writer, yet exploring themes to which all listeners will relate in their own way, the results are at once quite beautiful, unsettling, and intoxicating.

Musically speaking, Matthew & The Atlas 2014 debut album, Other Rivers, saw Hegarty pushing the boundaries of a classic folk sound into a bold, synth-laden territory, amassing a fervent cult following in the process. With Temple, he has made a tender return to his roots. „The first album went quite far one way  this time weve pulled back a few steps, he states.

While Other Rivers was written more sporadically, over the course of six years, the songs that make up Temple took just three months. Sketched out in Hegartys home studio in his native Farnborough, for the first few months of 2015 he pushed himself to write a song a week.

The song a week project was a huge success, firing Hegarty up to create his finest work thus far. With well over an album of songs written, he scooped up the collected material and headed off to east Nashville with bandmate Tommy Heap (bass, keys), to meet up with Brian Holl and Eric Hillman, otherwise known as electronic folk act turned production duo, Foreign Fields. There, the four men (joined at points by various local players), would begin crafting one of the first truly astounding albums of 2016.

In a nameless, simple Tennessee backyard studio, and stripped of production smoke and mirrors, they got down to making an old-fashioned record using an organic, easy-rolling approach. „There wasnt a regimented recording process  it was more about building the songs as we went, explains Hegarty.

Over the course of a five-week period, and in between beers and hangouts with friends around a fire in the garden, the songs were lovingly developed, with Brian and Eric discussing each track in depth with Hegarty and Heap, informing its unique production and recording style. It was a fluid, creative process, and one that left important time for adventuring. Most notably, perhaps, was a bachelor party arranged for Holl. It started as a civilized but outdoorsy affair which saw the men camping overnight in the Smoky Mountains. Heading into the mountain town of Asheville the next day, things shifted up a notch when the group saw a bus race pass them, with smoke and music streaming out of its windows. After a relaxing night in the woods, the collected stags ran after it, jumped on and supped some „interesting looking tea given to them by its friendly passengers. The next thing they knew, they had joined a rave in a local hippy commune. „It was very surreal, remembers Hegarty, smiling.

Hegarty himself is a cheerful type, but uses his sad but redemptive songs as a way of processing his worries and anxiety about everything from his new found fatherhood to the state of the environment. „Im not a particularly depressed person, but the album feels heavy because of some of the content, he admits, before introducing the dark, shadowy character which looms menacingly over the narrative of Temple.

„Im always singing about this black figure, begins Hegarty, talking about the unearthly presence which looms over the sweet, swelling menace of Graveyard Parade, lush harmonies of Old Master and racing Mirrors. „Its something I used to see. Id have a nightmare and wake up and see this figure standing over my bed. The figure first came to Hegarty after he was attacked in Paris on a school art trip when he was just 18. Stabbed in the stomach, he ended up in a French hospital for two weeks and has been left with deep scars both physically and emotionally from the attack.

Hegarty is careful not to over-mystify the genesis of his dark muse. „Im not superstitious at all, but I know that your mind does weird stuff, he says. „Over the years Ive used it as a tool to deal with all of that happening to me, and a way to think about it.

Something else was looming over Hegarty when he was writing the album too, the fact that he had just become a father for the first time. He almost tried to avoid bringing his new daughter into the process, but the strength of his emotion was too strong, so he ended up penning On A Midnight Street  a song about his worries concerning climate change and the kind of world his daughter will grow up in  in tribute to her, as well as Cant You See, a song to let her know hell always be there for her. „I was imagining if at some point when she was older and she felt alone and couldnt talk to anyone, this song might be able reach out to her and help in some way, he says.

A world away from the oversharing popstars of today, Hegarty shies away from social media. Yet with the advent of Temple hes been dabbling with sharing art inspired by each of the albums songs online. After becoming interested in photographs of abandoned buildings, Hegarty decided to team up with photographer friend Dave Watts, to create a photo project linked into the release of the record. The pair traveled to various locations across Cornwall and Somerset, with Watts shooting Hegarty in the wilderness, a tiny figure moving through a vast, desolate landscape, a small man in a big world; but one most definitely about to make his mark on it.