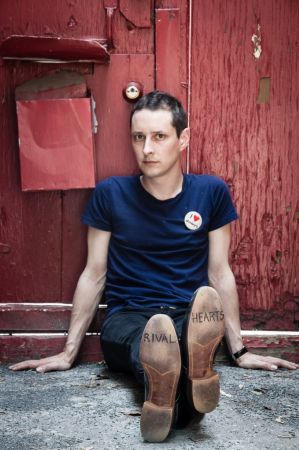 JF Robitaille is a born storyteller. But ask any of the canonizedDylan, Kerouac, Scorceseand theyll tell you the same thing: storytelling and human experience are inseparable. And that, perhaps, is whyRival Hearts narratives feel so vividly authentichis folk songs are painted with uncut globs of humanity.

For anyone familiar with his work, though, this shouldnt come as a surprise. Still cherished in his hometown for his cerebral work with his ex-band, Montreal indie-rock darlings The Social Register, Robitaille explored folkier territories with his acclaimed 2011 album, Calendar. It was intimate yet accessible, poetic sans pretension, and brainy without feeling academicand it established Robitaille as one of Canadas best songwriters. No, were not exaggerating: Critics have whispered his name alongside genre giants, from Bob Dylan, to Lou Reed, to fellow Montrealer Leonard Cohen.

But in the years since Calendars releasespent largely on the road, performing high-profile gigs at CMJ, NXNE, Pop Montreal and the Halifax Pop Explosion, amongst othersRobitaille has blossomed from one of the nations top emerging talents to one of its best songwriters. Period.

Robitailles abilities, though, have always been apparent. Hes shared stages with some of musics biggest namesSt. Vincent, Jonathan Richman, and Sean Lennon included. Hes lived (and played music) in Toronto, England and New York. And, while living in the Big Apple, he was discovered by Labelle member Nona Hendryx. She would eventually release his 2006 debut, The Blood in My Body, on her labeland Warner affiliateRhythmbank.

Yet when Rival Hearts is given the chance to simmer, Robitailles true charm emerges: Without leaning on well-worn folk clichés, hes a master at capturing rawand very realemotion. Robitailles sanguine yearning feels almost like Leonard Cohen covering Lou Reeds Transformer, or Robyn Hitchcock fronting Modern Lovers. Its timeless. Personal. Universal. Because Rival Hearts is about, well, rival heartsthe heartbreak that occurs when roots are pulled in different directions. And that experience is, if nothing else, universal.