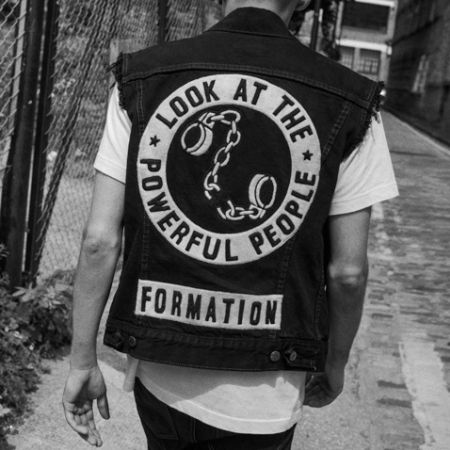 Formed by brothers Will and Matt Ritson, FORMATIONs life-affirming blend of disco grooves, punk attitude and vehement social insight builds towards its ultimate statement as the new single Powerful People (impacting December 16th) previews the release of their eagerly anticipated debut album Look At The Powerful People on March 3rd.

The news comes shortly after FORMATION completed a UK tour as guests to Jagwar Ma.

Powerful People burns with a foreboding atmosphere as hypnotic loops, swooping synths and boisterous percussion all build towards a climactic finale.

„Powerful People is about wanting to connect with people, explains Will Ritson. „Its a call to the masses from an alienated young man who is seeing all the people in the same situation as myself  the outsiders , the lost and the hopeless. Its about wanting to unite all these people and encourage ourselves towards something better with a positive outlook.

Produced by Leon Vynehall and Ben Baptie, Look At The Powerful People demonstrates that FORMATIONs forward-thinking sonics have evolved to reach their full potential. In addition to the new single, other highlights such as On The Board and A Friend capture FORMATIONs irrepressible and bass-heavy cocktail of dirty dance rhythms which pound with the fiery energy of their live performances. At the other extreme, Blood Red Hand is an understated, slow-burning anthem and the closing track Ring offers something entirely different with a dreamy, piano-orientated approach closing the album on an upbeat high.

In addition to the new tracks, the album also features fresh new productions of some of the key singles from FORMATIONs journey to date in the shape of Pleasure and Drugs.

„The album title refers to the moment when everyone has realised the secret power we have when we’re all together, reveals Will. „For me, its a power that relates to the security that I found when I was young and hanging with my outsider friends. We had no money and no scene but we didnt care because we had each other. We began to ask questions of the world and started to rebel about what we could or couldnt do or say.

Inspired by artists as diverse as Sly and the Family Stone, John Maus, Fugazi, David Bowie, Iggy Pop, Herbie Hancock, Theo Parrish, Beastie Boys, Pantera and Ornette Coleman, FORMATION have built a cult following as well as exponential critical acclaim including a nomination for Best Newcomer at the NME Awards.

Look At The Powerful People will be released on digital and CD formats. In addition, Rough Trade will stock an exclusive vinyl format which will be signed and hand-numbered by the band. Fans who pre-order the album will receive instant downloads of Pleasure, Drugs and Powerful People.