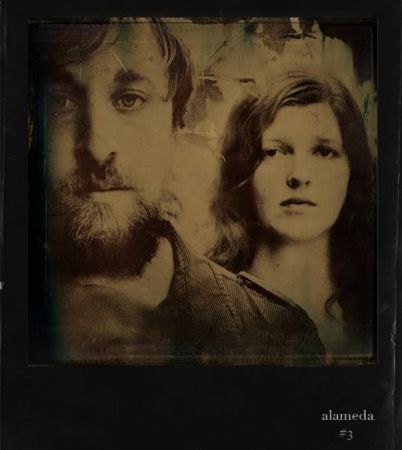 Weaned in the mile-high confines of Denver, Colorado, the core of Portland chamber-folk collective Alamedaguitarist/vocalist Stirling Myles, and cellist/vocalist Jessie Dettwilerhave weathered their share of evolutions during their musical marriage. Beginning as half of instrumental post-rock outfit Strangers Die Every Day, Myles and Dettwiler had already cultivated a unique understanding for the sonic properties of strings, and the beauty in voiceless aural planes.

But it was the grounding of those stratospheric intentions, and the introduction of Myles abstract storytelling that proved to be a musical epiphany of sorts for what would become Alameda.

„Slowly, I realized the potency within softer music; its not like you had to really push it, explains Myles. „Ive always had an affinity for folk, growing up with it. I loved Dylan, Donovan, Patsy Cline. I always loved how you could capture a mood with less voices present.

The seeds of Alameda were sown when Myles previously supportive role of bassist fell by the wayside, as he embraced guitar and began to sing. This move hatched an untapped wellspring of song ideas, despite an initial learning curve, and a deliberate songwriting process that accounted for the bands first self-released LP, Seasons/Specters. A rolodex of local musicians helped to carve out Myles initial output of tunes with more organic instrumentation, culminating in the addition of clarinetist Jennifer Woodall early on. The group now also includes Tim Grimes on guitar, and Barra Brown on drums.

While Seasons represented what Myles describes as a „sounding board of general ideas he had during his initial metamorphosis to songwriter, the songs that made up the collection hinted at the austere soundscapes and fully formed string-and-horn arrangements that the band utilizes to crisp precision on Procession. The bands sophomore album is set for release September 15 on Myles label False Migration.

„Seasons/Specters was the great starting point, but now its going into where I feel the songs are more realized because we are bringing in these distorted tones, says Myles. „I always felt like distortion and dissonance was a really beautiful thing.

Myles Buddhist school upbringing, and his meditations on space, community, dialogue and abstraction account for major sub-themes on Procession. „Colfax, the albums opener, emerges an ominous foreshadowing of the shape-shifting panorama found throughout the record. Disparate snapshots of pensive scenes are back-dropped by beautifully lilting cello and violin, while driving acoustic guitars, French horn and trumpet provide spacious reservoirs for Myles deliberate vocal phrasing. The contrasts on similarly broad-reaching opuses like „Slow Beginnings provide equally gilded and gloomy similes of war and peace, light and dark, the gristle and glare of life.

„The intention of this album was looking at and going in and out of perspective. Ive really been fascinated with looking at moments in media res, moments in time, explains Myles. „You enter in the middle, exit in the middle. Some songs blow it up into general emotions of different aspects of what a procession is in different contexts, but it also goes into very specific things as well.

Myles desires to open dialogue and to embrace the natural byproducts of communal space within his music adds a familial presence to more unrestrained tunes such as the slowly building „Swollen Light or the briskly delivered, vaguely Sam Beam-ish folk ditty „Summer Dharma. The result of this symbiosis, as youll hear, is a uniquely honest and vibrant listen.

Recorded by Skyler Norwood at Miracle Lake Studios, the band continued its collaborative approach on Procession, bringing in friends Nate Crockett (violinist for Horse Feathers), multi-instrumentalist Dan Pisarcik, and Ages and Ages drummer Dan Hunt, among others, to round out production.

„This album is very community oriented, and in some ways it just happened to be that way, says Myles. „It happened organically. I think you can hear everyones enthusiasm.